Below, you will learn the rationale of combining CSS variables with the Setter and Getter pattern. We will try to mirror our thinking process, the reflexion we had along with the design of this solution.

The next sections of the Guides will be decidated to a more practical approach, where you will learn about the common usage of this library, whether its block coloring, component-based coloring or global theming. In contrast, this section has a more abstract and theoretical focus.

We greatly invite you to read this section so you have a better abstract understanding of the workings of Swatch. This will help you make the most out of it, and will maybe even inspire you to come with additional solutions and patterns !

The starting point of this reflexion is a need for coloring HTML blocks (or, more complex, nested blocks which we'll be referring to as components).

Using vanilla HTML and CSS, we can style a block in the following way.

A naive example in plan CSS/HTML#

If you wish to make a block with a blue background, your code might look like this

The div element will appear styled with the CSS property and value couple background:#05668D. Pretty basic.

And if you wish to use the same color for another element, let's say a paragraph of text, you would have to do :

Now, if we wish to introduce a second color, say red, we would have something more verbose still

As you can infer, this approach is hardly scalable/maintainable because of the following caveats :

To make the previous a bit easier to maintain, we can use CSS preprocessors (SCSS or LESS) to introduce variables and make changes in styling easier.

We can substitute the CSS by SCSS and introduce variables like this :

This approach has the following caveats :

CSS introduced CSS variables, which are at the time of writing (November 2020), are supported by 95% of browsers. (If you are coding for IE11, you are probably not looking to use cutting-edge features anyway.)

With CSS variables, we would write the following code to achieve the same functionality.

This approach is very similar to the preprocessor approach, and only improves on it by making the variable available to the broswer (and not having to compile). Concretely, it allows you to play with varaibles at the browser level (enjoy inheritance, scope, and debug utilities).

Subsequently, it still doesn't solve the problem of having a huge number of Colors x Components.

In the CSS inspector of your browser, you can see the variables available in the page and modify/debug them. 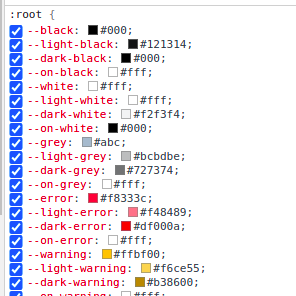 To wrap it up, we've seen through the previous examples that the two main issues of doing coloring and theming in CSS are:

Now you probably see where this is going : we will solve the problem of having exponential classes ...

Introducing the Setter and Getter Pattern#

Take a look at the following code :

Here, we are also using the CSS variables, altough in a more efficient way.

Concretely, we are doing the following

You have now read your first 'Setter/Getter' pattern in CSS.

Let's make a short break to realize the code savings.

Here, the total number of classes is 4 as well (2 'setter' classes, and 2 consumers, or 'getters'). If we add more Components or Colors, the quantity of code increases in a linear way.

As you can see, this approach

In the next sections of the Guides,

Swatch is a CSS library that leverages this pattern for you to color and theme your UI in a code-efficient way.

There are two differences with the previous (illustrative) example :

Don't worry. If this is still not clear, the following infographic will sum it up for you ! 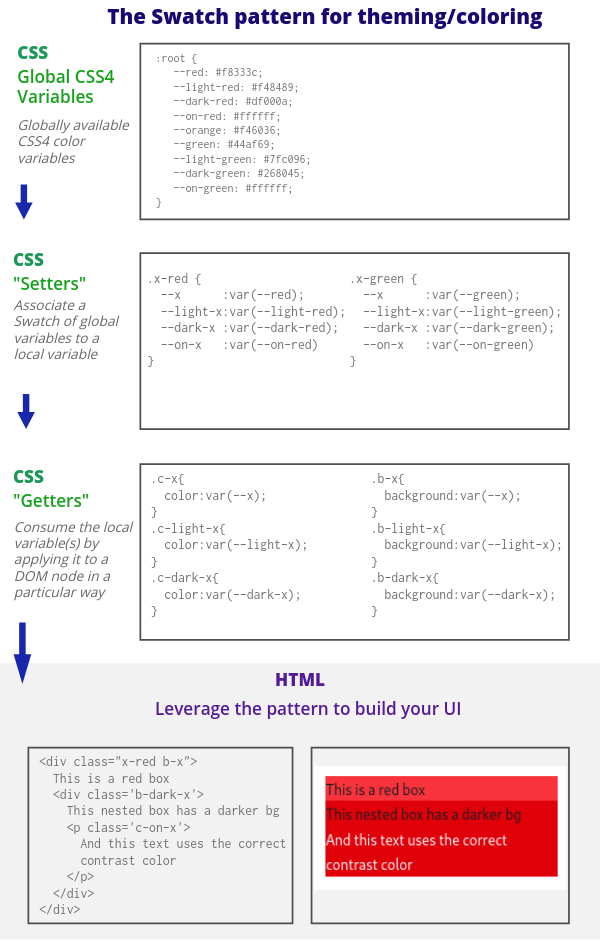 And yes, Swatch provides ALL the required CSS for you to leverage the Setter/Getter pattern. The only thing you have to do is write HTML !

Now you are familiar with the rationale defining Swatch, the next thing to do is to look at usage examples and start building your own html and components !

(Advanced) A few words about scope#

Setters and Getters work by associating variables to a Scope.

If we want to pursue the comparison with the Setter and Getter pattern in OOP :

CSS variables have the 'power' of being inherited by the Shadow DOM. This means you can easily use CSS variables (and the Swatch library), to theme subdocuments included through the <use> tag. This feature allows you to style, for instance, svg sprites. Read more about this here (the part about CSS variables is located at the end of the article).